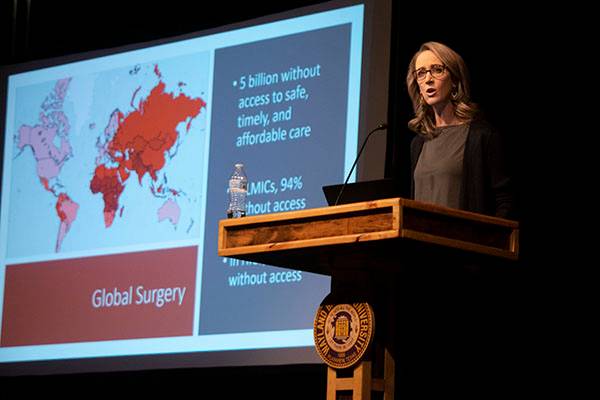 Dr. Emily Smith, a WBU alum, Baylor faculty member and researcher for Duke Global Institute of Health, speaks in chapel as part of the Willson Lectures series at Wayland Baptist University on Wednesday.

Wayland Baptist University hosted the 70th Willson Lectures series with Dr. Emily Smith, a Baylor faculty member and researcher for the Duke Global Institute of Health. Dr. Smith led the discussion focusing on public health and faith, and the influence it had on her journey to “Having it All.”

Smith, a 2003 graduate of Wayland, led the discussion during a dinner Tuesday evening, chapel on Wednesday and an informal luncheon following chapel. On Tuesday, Smith spoke on “Global Missions Through Research: The Intersection of Faith, Epidemiology, Economics and Policy.” Epidemiology is Smith’s chosen field of research. Simply stated, Smith said epidemiology is the study of public health. Her goal is to study populations to determine what groups suffer from higher health risks and how to find solutions for those groups. In particular, she is looking at global surgery.

Smith’s research focuses on Somaliland, a region that is not recognized as a sovereign country by the United Nations, but is the fourth poorest nation in the world with an average income of $350 per year for a family. Through research, Smith can show the reciprocal relationship between poverty and poor surgical care for children. She plans to take the research to donors and the United Nations to ask for significant funding to help bring proper care to poverty stricken areas.

In chapel, Smith continued the discussion and also touched on a more personal area, leading to her current position as researcher and contributor to the United Nations. As she completed her bachelor’s degree at Wayland and moved through her master’s and into her doctoral work, she felt that her worth had been defined by what she could achieve. She read book after book about how a woman can succeed in a man’s world, each one focusing on how a woman needs to be mean, aggressive and assertive while still wearing high heels.

“For women like me, who are not aggressive, that did not fit,” Smith said.

While working on her doctorate, Smith hit a point where she simply could not keep up. She was striving and hustling to make sure she was doing all the required research and publishing, but every time she tried to climb the career ladder, she kept slipping back down. Smith referenced Genesis 11 where the Babylonians tried to build a tower to heaven to show how much they loved God. This approach did not work. She then referenced Matthew 6:33 that says, “Seek first the Kingdom of God.”

Smith decided to seek the kingdom of God and back away from the hustle of trying to compete. She stopped publishing as much and focused more on faith and family. When she did this, she was told she might not graduate and finding a job would be difficult.

It was a gamble.

But she found the right balance and continued to work on her doctorate, completing her dissertation and graduating. One day, though she wasn’t actively looking for a job, she was offered an interview at Duke University, where she still works.

“People had told me I might not get a job unless I hustled more,” she said. “I quit hustling and before I graduated, God had provided a job for me. To me, it shows His faithfulness. I could tell story after story of when God would multiply effort when I pulled back. My definition of having it all was redefined.”

Smith challenged students to do the same, focus on the kingdom of God and not worry so much about the hustle to succeed.