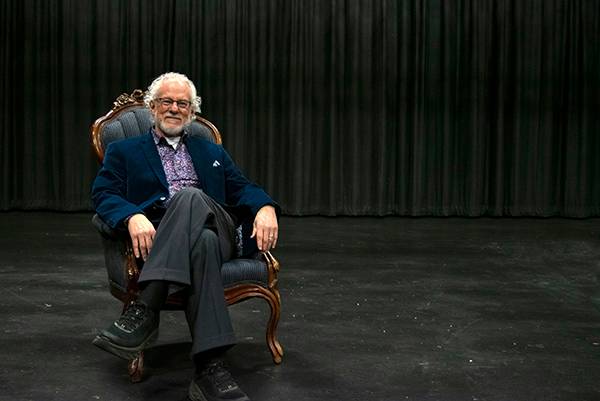 Dr. Marti Runnels sits in the Black Box theater, a venue he has called home for the last 30 years. Runnels is retiring from his position as professor and director of theater.

As a minster’s son pursuing a pre-med degree to work on the medical mission field in third world countries, it was only natural that Marti Runnels would spend 30 years teaching theatre. …

It’s a wandering story, but what turned into a drastic career change for Runnels ended in 30 years of theatrical expertise and innovation for Wayland Baptist University. Runnels, a newly minted Ph.D. in 1989, was hired to teach theatre. And while his career kept him planted firmly in Plainview, the time has come for Runnels to load his travel trailer and set out on a new adventure, closing his career at Wayland.

It’s a story that started far from the stage.

“A lot of people say, ‘I felt called to ministry,’ or ‘It is what I always wanted to do,’” Runnels said. “I had none of that and I’ve never pretended I had any of that.”

Runnels had every intention of pursuing a medical career and going into medical missions. He attended Baylor University as a pre-med major, pursuing the medical degree for a while before realizing medical missions were not for him. Runnels went on several mission trips into regions of the world that were disadvantaged where he assisted doctors and dentists.

“I found out in doing that I didn’t really like it,” he said. “I had this fantasy that you were going to go and get to talk with people and get to experience their lives and learn about them and have these connections. No!”

Runnels said everywhere he went there was only one doctor for thousands of people. He likened it to an auto mechanic who diagnosis the problem, slaps a quick fix on it, then moves onto the next one.

Runnels dropped out of the pre-med program and started looking at other career options. He spent a summer as a youth minister at a small church in Kansas City. Even though he was scheduled to be there for only a few months, Runnels became attached to the youth, who became fond of him as well.

“When I got ready to leave, they all just melted down and cried and begged me not to go,” he said. “I just could not leave them. That sort of began my ministry life.”

Runnels moved from that church to another where he worked with youth and youth choirs. He began adding drama to the church presentations and found that he really enjoyed it. That love eventually drove Runnels to Southwestern Seminary in Fort Worth where he could pursue a new degree in communication arts that included radio, television, film and theatre. Runnels thought that degree would lead to a position in a large church. On further thought, however, that didn’t make sense.

“About the last six months, I started thinking, wait, how many jobs are out there like that? Gigantic churches where the only thing you have to do is everything I wanted to do in theatre,” Runnels said. “I thought, this is ridiculous. What if there is not an opening at one of the five churches in the United States that has that?”

While his career choice once again took a back seat, Runnels’ love of the theatre was alive and well, driving him to the Ph.D. program at Texas Tech University. As he was completing the program, Runnels was offered the job at Wayland.

“I thought, you know, I’ll come to this little school, be here for a few years then I’ll be gone,” Runnels said. “I’ll do something else, go somewhere else, somewhere bigger.”

Runnels never left. He fell in love with the people and the students at Wayland and made it his home. He used the theatre as a platform to “preach.” Whether tackling historical constructs in shows like Bleeding Kansas or social questions in shows like Seven, or perhaps offering a learning experience with Kindertransport that dealt with the holocaust, or The Amish Project that expressed forgiveness by a community after a tragic school shooting, Runnels always tried to convey a message.

Runnels has performed world premieres and state premieres on the Wayland stage, and in 1997, Wayland became the only amateur theatre group to ever perform the show Cowgirls. The show called for cast members who could basically play any instrument. They would just pick up instruments and play on stage. Runnels came up with an unconventional idea, having the actors mimic the playing while professional musicians provided the music. When the publishing company found out, they had to contact the author to make sure Runnels could produce the play in that manner. The author eventually agreed, but it led to closing of amateur rights for the play following the Wayland production.

“We are the only amateur production of that show,” Runnels said. “Those women who performed that show here at Wayland have that on their resume and no other non-professional will have it.”

“I know he was just thinking, let’s do this one time for the board member. It will make her happy. It won’t be that great and we will make our excuses for why they won’t come back,” Runnels said.

Runnels assured the executive director that the show would be good and he would not be disappointed or have to apologize to the patrons.

“I said, I will bring you a show that is on par with what you have there,” Runnels said.

Following the performance of Art, Runnels was met in the hall by an overwhelmed executive director.

“He must have said, ‘Oh my, God!’ twenty times,” Runnels said. “I said, I told you. Right after that, he asked if we would come back for the next 10 years no questions asked.”

In all, Runnels directed more than 90 productions in his time at Wayland, and acted in many more. He served as professor, division chair and dean of the School of Fine Arts. But what he says kept him at Wayland was the people.

“I had opportunities to go other places, to do other things, and I never really wanted it bad enough to leave here,” Runnels said. “There is so much about Wayland that I was really drawn to, that I wouldn’t think I would be when I first got here.”

Runnels success and longevity throughout the years was evident at his retirement as former students put together an evening to celebrate their mentor. Approximately 90 former students and friends from as far as away as Alaska and Chicago gathered in the Black Box Theater to surprise Runnels with a special evening of reminiscing and storytelling; of tears and gratitude; of honor and recognition of an outstanding and influential career. And while Runnels will no longer run the show in the Black Box, his legacy will live on.