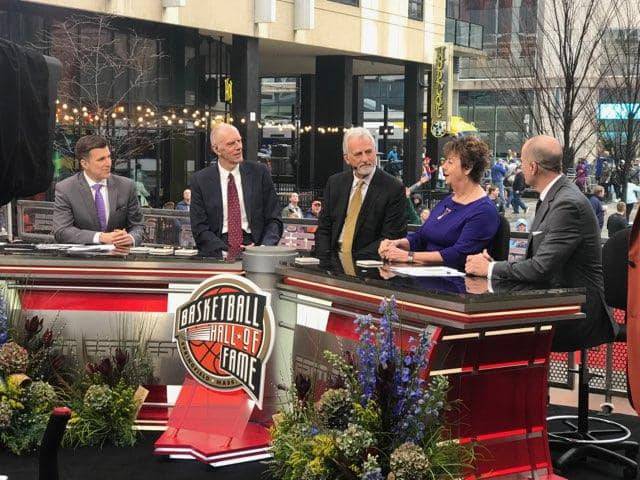 The Flying Queens program was at the forefront of women’s basketball, offering full athletic scholarships for women in 1950s. The Queens soared to 10 AAU National Championships from 1954-75. The Flying Queens and coach Harley Redin were influential in transforming the women’s game to the full-court, 5-on-5 with unlimited dribble style of play. The Queens also won a record 131 consecutive games from 1953-58.

Former Flying Queens are celebrating the induction that has been more than 70 years in the making.

“I am thrilled that the Hall of Fame has recognized the historic impact of the Flying Queens basketball program,” said Alice “Cookie” Barron, who played for the Queens from 1954-57.

Dr. Sylvia Nadler, a 1971 Wayland graduate who served as chair of the Health, Physical Education and Recreation Division from 1978-90 and was the Director of Athletics from 1983-90, authored a book on Flying Queens history.

“I am thrilled beyond measure,” Nadler said. “I have been working on preserving the history of the Wayland Hutcherson Flying Queens since 1973 and have always believed the Flying Queen program to be vital to and representative of the history of women’s basketball.”

“I was speechless when I first learned the Flying Queens had been selected for the Naismith Basketball Hall of Fame,” Price said. “There were a few tears of pure joy and gratitude as I thought of all the pleasure that this announcement brings to so many Flying Queens, the Hutcherson family, our coaches – especially my coach Harley Redin – their families and friends.”

“I am truly humbled by joining so many great and awesome players in the Hall of Fame,” Price said. “I’m so proud to be a part of this history and honored to have a role in recording it.”

Much of the Queens success is due to legendary coach Harley Redin who coached the team from 1955-73. Redin not only maintained a respected, quality program, he was instrumental in the movement to change the women’s game to the full-court, 5-on-5 style that is played today. Redin won 429 games as coach with only 63 losses, and was coach for the final 79 wins in the 131-game win streak. Cherri Rapp, who played for the Queens from 1968-72, pointed to the role Coach Redin played in making the program a success.

“We are also grateful to Coach Redin who was responsible for helping change the landscape of women’s basketball long before Title IX,” Rapp said. “The Flying Queens are thrilled to be inducted into the Naismith Basketball Hall of Fame.”

The Hall of Fame induction ceremony will take place Sept. 5-7 in Springfield, Mass. The Wayland alumni Association is planning an trip to the northeast that includes a ticket to the enshrinement ceremony. For more information on the travel program, contact Alumni Director Teresa Young at teresa.young@wbu.edu. The trip is open to anyone interested.