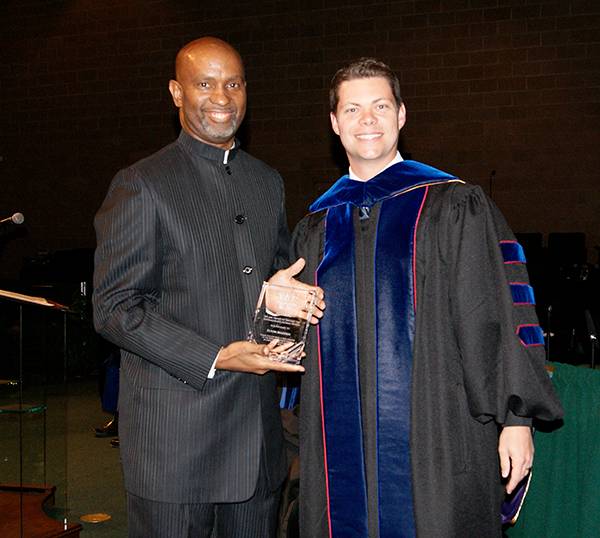 Elton Madden, left, shows off his Distinguished Alumni Award given to him by Dr. Andrew Marquez.

PHOENIX – Wayland Baptist University honored one of its alumni at the April graduation ceremony in Phoenix. Amid a backdrop of degrees and commencement addresses, Elton Madden was named the Distinguished Alumni Award winner for the campus for 2019.

Madden serves as chief of the education, training and testing section at Luke Air Force Base, the original site of Wayland’s branch campus in Phoenix and still an active office. A native of Gadsden, Ala., Madden spent two and a half years in the U.S. Army Reserves and more than 24 years in the U.S. Air Force, serving as an education and training specialist. He retired in 2011.

Besides the bachelor’s degree he earned at Wayland in 2008, Madden also has a master’s degree in human resource management from Webster University and a professional manager’s certification from the Community College of the Air Force.

Outside of work, Madden is active in the Antioch Church of God in Christ in Peoria, where he is vice president of the usher’s ministry and is a zone leader, engaging and caring for members in his zone. He also volunteers with the church for a homeless feeding ministry and works with young basketball players to develop their skills.

“Wayland is so grateful for the many servicemen and women who join our family as alumni and go on to serve their community and country in ways outside of their military service. That’s what makes Elton Madden such a great choice for this award,” says Teresa Young, director of alumni relations. “After putting in his own service, he continues to assist current service members in their educational pursuits through the offerings at Luke. We are proud of his accomplishments.”

The Wayland Alumni Association recognizes an alumnus from each of its 13 campuses throughout the calendar year, culminating in the homecoming awards banquet and the presentation of the Alumnus of the Year chosen from the 13 honorees. By the end of 2019, a total of 18 individuals will be honored by the university for their accomplishments, representing a wide breadth of professions, locations and military backgrounds.