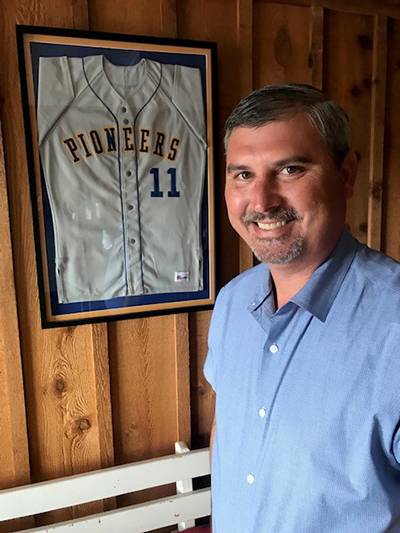 Brandon Inman, State Farm agent in Monahans, Texas, will be honored with a Distinguished Alumni Award at Wayland Baptist University during the fall 2019 homecoming festivities. The awards will be presented at the homecoming banquet at 5 p.m. on Friday, Nov. 1 at the Pete and Nelda Laney Student Activities Center.

A 1998 graduate of Wayland, Brandon was part of the Pioneer Baseball team during his time on campus. He continues to support the program generously and ensure that current athletes have the same experience he did.

Brandon earned a bachelor’s degree in business administration and was hired before graduation to be an area manager with the Wal-Mart Distribution Center in Plainview through a partnership with the university. He transferred after graduation to Pauls Valley, Okla., to help open the 10th Wal-Mart grocery distribution center.

Brandon then pursued a career in investments and financial services with Ameriprise Financial, formerly American Express Financial Advisors. He built a practice in Wichita Falls from scratch in 2000, providing fee-based planning and asset management services. In 2002, he and wife Amy moved to Lubbock to open a second location for the practice. They sold the business after seven years, and Brandon worked in finance with the City of Lubbock as their senior financial analyst.

In 2008, Brandon hired with State Farm Insurance and covered a West Texas territory as a financial consultant. In 2011, he had the opportunity to take over the State Farm Agency in Monahans, Texas, and has grown the business significantly in the last eight years. He has finished in the top 3 percent of agents four times and twice finished in the top 50 in banking services across the State Farm companies. He expanded his business in 2017 by opening a branch agency in Pecos, Texas.

Brandon and Amy are part of a family vineyard operation in Childress, Texas, started in 2010. In 2016 they started Four I’s Winery to produce their own grapes and are opening a tasting room in Dripping Springs next year.

The Inmans are active in Crossroads Fellowship Church in Monahans and many civic and charitable organizations as well. Brandon and Amy have two children, Abby, a high school junior, and Bo, a seventh grader.

“In just 20 years since graduation, Brandon has become a successful businessman and operates his agency with the integrity and relationships that are key in today’s marketplace,” notes Teresa Young, director of alumni relations. “His career track record and his pattern of giving back to his university make him an excellent choice for a Distinguished Alumni Award at Wayland, and we could not be happier that he is on this year’s lineup.”

Homecoming at Wayland starts on Friday morning with the traditional chapel service and includes guest lectures, theatre performances, honor class reunions for years ending in “9” and various athletic events, including the Athletic Hall of Honor induction of the Flying Queens from 1948-82, the same group being inducted into the Naismith Basketball Hall of Fame in September. The weekend caps off with a celebratory outdoor concert at Harral Auditorium featuring food trucks and free live entertainment. For more information on Wayland’s homecoming and links to register, visit the website at www.wbualumni.com/homecoming .