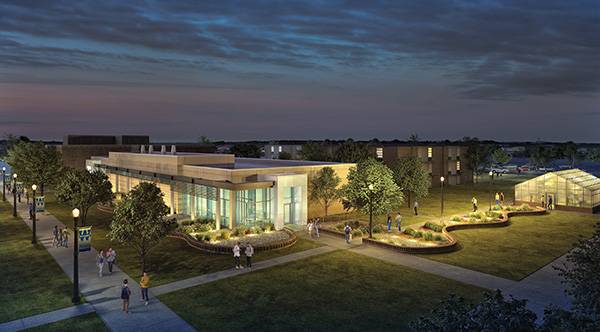 The Impact2020 Campaign included constructing a new wing onto the Match and Science building.

The Impact2020 campaign for Wayland Baptist University is on schedule to wrap up this year, surpassing the total goal of $40 million. According to Dr. Kevin Ludlum, Vice President for Institutional Advancement, Wayland has raised more than $36 million in gifts or pledges during Impact2020. He is confident the university will surpass the goal by year’s end.

“The outpouring of support for our university and our students has been amazing,” Ludlum said. “We are pleased to announce that we are this close to the end of our campaign, and we look forward to working with our donors to surpass our goal.”

The remaining $3.9 million includes the completion of 3 building projects. Wayland plans to renovate and expand on the existing Moody Science Building that will house the Kenneth L. Mattox School of Mathematics and Sciences. Dr. Mattox is a 1960 graduate of Wayland who serves as the Chief of Staff at Ben Taub General Hospital in Houston. Mattox has pledged $2 million to the project that includes renovating the existing building and constructing a new wing that will house updated labs and classroom spaces. The School of Math and Sciences is one of Wayland’s fastest growing academic areas. As such, the need for new classroom and lab spaces has become paramount. The total cost for renovation and new construction is approximately $7.2 million

Wayland is also looking to construct a new athletics training facility that includes a weight room and sprint track, as well as other training equipment and spaces. Wayland’s athletes continually compete and win at the national level. The $2.5 million project will provide a much-needed space for Wayland’s student athletes.

The final building project within the scope of the campaign is a rehabilitation of Gates Hall exterior at a cost of approximately $825,000. The project restores the iconic building that is more than a century old. Time has taken a toll on the structure and it must be repaired so Gates will remain for generations to come.

Impact2020 initiatives also include raising money for student scholarships, programs and university support systems. Fundraising has exceeded the targets for those areas, leaving only the building projects to complete.

Wayland has secured a $2 million matching grant, meaning any gift given to the university building projects between now and the end of October will double. If you would like to make a donation to WBU’s building projects, please contact the Office of Advancement at 806-291-3426. Naming opportunities are available for all projects.