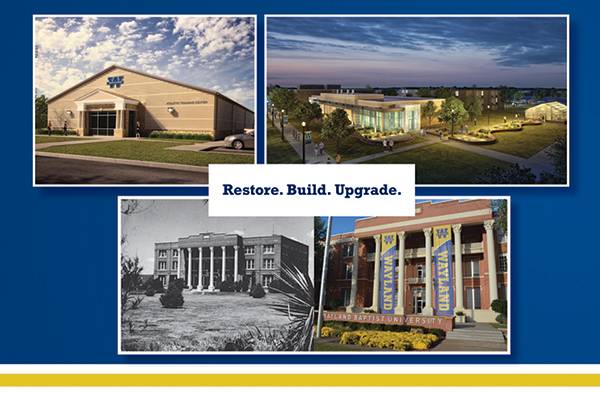 PLAINVIEW – With the final numbers calculated, Wayland Baptist University announced the completion of the Impact2020 campaign, totaling more than $43.1 million in the past 6 years. With an original goal of $30 million, the university set a challenge goal of $40 million, eclipsing that target by more than $3 million.

Vice President of Institutional Advancement Dr. Kevin Ludlum said the success was a result of the partnership between Wayland and its generous donors.

“With almost 25,000 gifts we were able to raise more than $43 million, far exceeding our original goal,” Ludlum said. “We couldn’t be more appreciative of our donors and friends who stepped up ­­­‑‑ even through the economic impact of this pandemic -- and made sure we reached our goal.”

“We are thankful that Wayland’s donors have been so loyal in supporting the university during one of the most challenging times in our history. These gifts will make a lasting impact on all our Wayland campuses and WBUonline,” Hall said. “Our past and present trustees, along with Dr. Ludlum and his institutional advancement staff, are to be congratulated for successfully completing the largest comprehensive campaign in Wayland history.”

The revitalization of Gates Hall has already begun, and plans are being made for the addition to the science building and the new athletic training center. The updates to Gates Hall will cost nearly $1 million. The projected cost of the athletic training facility is $2.5 million, and the addition and renovation of the science building is estimated at $7.5 million. The remaining money is earmarked for student scholarships and operational costs benefitting all Wayland campuses.

The addition to the School of Math and Sciences building will provide much-needed lab space with updated technology and equipment. Wayland science students are regularly recognized for their undergraduate research at regional and national events. The updates will allow them to build on their already successful research. The academic school will also be renamed in honor of Wayland alumnus, Dr. Kenneth Mattox, a renowned surgeon who pioneered the “Mattox maneuver” technique for heart surgery. Dr. Mattox, a 1960 graduate of Wayland, is set to retire as Chief of Staff at the Ben Taub General Hospital in Houston in March.