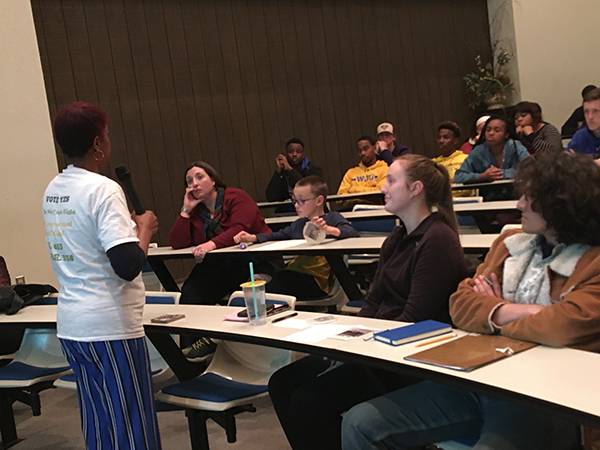 PLAINVIEW – A sincere comment from a male Wayland Baptist University student at the close of An Evening with the 6888th Battalion seemed to summarize the feelings of many in the room: “It is inspiring to see how these women went through so much adversity but just kept going strong. It makes me proud to be a black person,” said Martin Harding, who is also part of Wayland’s track team.

The comment capped off a night with guest speaker Elizabeth Helm-Frazier, a 25-year Army veteran and Wayland alumnus who was instrumental in helping raise the funds for a national monument honoring the 6888th, a unit of 885 African-American women who were assembled in 1944 to tackle the large backlog of mail that had been sent to American soldiers in World War II but had not been delivered.

“Mail was the third most important thing to a service person,” said Helm-Frazier, a native of Florida who lives in Laurel, Md., and works for the Veterans Administration in Washington, D.C. “First was our paycheck, and second was clothing and food. But that mail is what connected us to home.”

Following a swell of requests from women to take a more active role in military service, supported heavily by civil rights activist Mary McLeod Bethune and Eleanor Roosevelt, the 6888th was formed and sent to Birmingham, England, in February 1945 as a postal directory battalion with a singular purpose and a six-month goal. They cleared numerous hangars full of mail in three months, working in three shifts around the clock. The 6888th was then sent to Rouen, France, and then to Paris to do the same thing there, again completing the monumental tasks in three months.

During an introductory time, Helm-Frazier pointed out that the work was done in hangars, without the luxury of temperature control and with a world war raging around them. Several of the surviving women recalled being chased by submarines while en route from New York to England to report for duty.

She then called survivor Deloris Ruddock, now 96, at her home in Maryland and asked her to share some of her own memories via speakerphone for the full audience at the Llano Estacado Museum auditorium. Ruddock had joined the Women’s Army Corps but felt her white male unit leader wasn’t particularly fond of her. She requested to go overseas and was moved to the 6888th, where she and others would enjoy the leadership of Major Charity Adams, a fellow black female soldier.

Helm-Frazier then introduced the documentary “The Six-Triple-Eight: No Mail, Low Morale,” for which she served as a producer and promoter, and the audience enjoyed the premiere screening in West Texas of the 72-minute film. A product of Lincoln Penny Films, the documentary included some stunning film and still photos from the 6888th in action during the 1940s and interviews with all the surviving members of the unit, now numbering only seven. It also included footage from the November 2018 dedication of the monument in Buffalo Soldier Park in Fort Leavenworth, Kan.

A brief Q&A time with Helm-Frazier followed the film, with refreshments in the museum’s Great Hall after the event ended.

Wayland’s museum opened a brand new virtual exhibit on the 6888th battalion’s experience during the evening and it will remain in the Great Hall for viewing through 2020. Besides a presentation of many video and photo clips from the era, the exhibit includes a staging of the mailroom working environment the battalion would have faced. Admission to the museum is free and it is open to the public, located at 8th and Smythe Streets in Plainview, on the north side of the Wayland campus.

Helm-Frazer earned her bachelor’s degree with Wayland in 1999 while stationed at Fort Sam Houston in San Antonio. While serving our country, Liz was recognized as a Career Counselor of the Year, was Mentor of the Year in San Antonio, and was Volunteer of the Year for the Women’s Army Corps in Fort Gordon, Ga. She has also been honored for her great work with the 6888th Battalion, including a selection to the U.S. Army Women’s Hall of Fame, with induction set for March 2020.

But her work is not over, as she and others continue to lobby for Congressional Gold Medals for the battalion members and a commemorative U.S. postage stamp as well. She was honored to attend the screening of the documentary in May 2019 in England at King Edward’s School, the site where the women worked during their wartime service.