The Duality of Franz Liszt 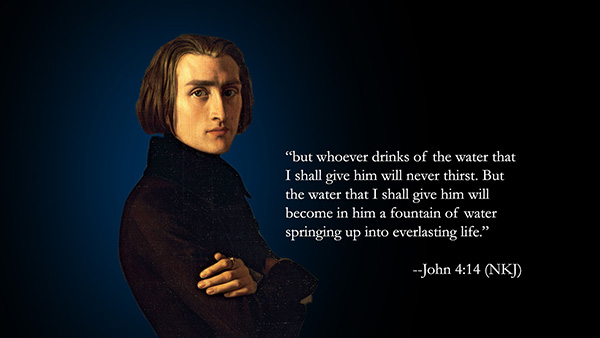 While Franz Liszt (1811-1886) was known as a bit of a rock star for his day, the truth is there was a duality to his personality that manifested itself in his music. Dr. Richard Fountain, professor of piano at Wayland Baptist University, explains that Liszt was deeply committed to his Catholic faith.

According to Fountain, Liszt carries this duality into his work. In particular, “The Fountains of the Villa d’Este” has a unique notation. The original composition is available as public domain and on it, you can see Liszt’s handwriting where ne notates John 4:14: “The water that I will give him will become in him a spring of water welling up to eternal life.”

Fountain explains that while Liszt was writing a piece to evoke the sense of water in the fountains at Villa d’Este, he was also writing a meditative devotional on this scene from the Gospel of John.

You can find out more interesting musical facts by following the School of Music on Facebook, or by subscribing to our YouTube channel and watching the Music in Minutes playlist. New videos are released every two weeks.