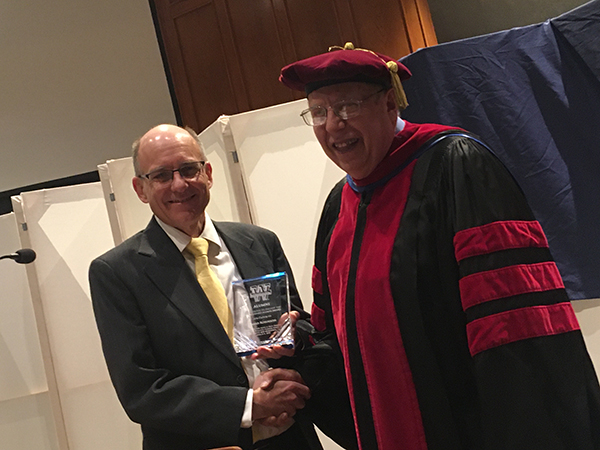 He has more than 30 years of telecommunications experience, starting at Penasco Valley Telecommunications in Artesia, N.M., where he spent eight years before moving to Clovis to join Plateau in 1996. Since then, he has worked as the controller, chief financial officer and assistant CEO before taking his current role as CEO.

Besides his work leadership, Robinson serves as Clovis city commissioner for District I, is a Chamber of Commerce ambassador, is chairman of the Clovis Committee of 50, and is a member of the United Way of Eastern New Mexico’s Youth Success Task Force. He also serves on the Clovis Municipal Schools Foundation board of directors and is active in his local church.

David and his wife P.J. have a son, Luke, a student at Arizona State University.

The Wayland Alumni Association presents Distinguished Alumni Awards to deserving individuals from each of its campuses throughout the calendar year, culminating at the homecoming weekend with the Alumnus of the Year Award selected from those 13 honorees.

“Wayland has a rich heritage of producing alumni who both excel in their chosen careers and who are giving back to their respective communities in amazing ways,” said Teresa Young, director of alumni relations at Wayland. “David Robinson has been familiar face in Clovis and has contributed to many worthwhile community projects, making him a natural choice for this award.”