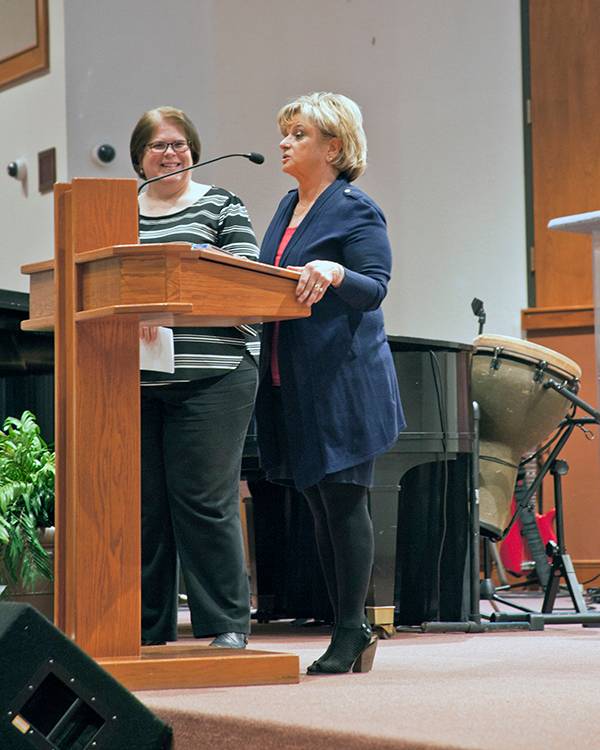 CLOVIS – Wayland Baptist University honored one of its own as the Distinguished Alumni Award winner for 2019 while celebrating the graduation of its newest alumni class on Friday, March 8. Gayla Brumfield, a 2003 graduate of the Clovis campus, was named the second Distinguished Alumni Award winner for the campus since the program expanded in 2018 to include an honoree from each of Wayland’s 13 locations.

Brumfield was born in Texas, but she has lived in Clovis since age 10, graduating from Clovis High School in 1971. She went into the real estate business in 1974 and became the broker and owner of Coldwell Banker Colonial Real Estate in 1985. Though she sold the business in 2014, she remains active as owner of the Brumfield Group real estate and consulting.

Gayla earned her associate’s degree from Clovis Community College, then earned her bachelor’s degree in business from Wayland in August 2003. In addition to her work helping families find their dream homes, Gayla has given back immensely to her community. She served as mayor of Clovis from 2008-2012, after serving as District 1 Commissioner from 1996-98. While mayor she helped renovate the historic Hotel Clovis; secured bonds to expand the zoo and spruce up the park system; fixed streets and bridges and much more.

She has served in other capacities as well, including the Clovis-Portales Board of Realtors, the New Mexico Real Estate Commission, the Clovis City Commission and the boards of the Clovis Community College, the United Way, Chamber of Commerce and the Plains Regional Medical Center. She is past president of the Chamber and was named Citizen of the Year twice as well as past NM Realtor of the Year. As former chair of the Eastern NM Water Utility Authority, Gayla led the Ute Water Project to bring sustainable water to the area.

She and husband Don have been married 46 years and have two children and three grandchildren.

“On behalf of our alumni board, I am honored to present the 2019 Distinguished Alumni Award for Clovis to Gayla Brumfield,” said Teresa Young, Director of Alumni Relations, who presented the award. “Thank you for being a true example of the Wayland Pioneer spirit in service and excellence.”

Clovis Police Chief Doug Ford was honored in 2018 with the Clovis campus award.