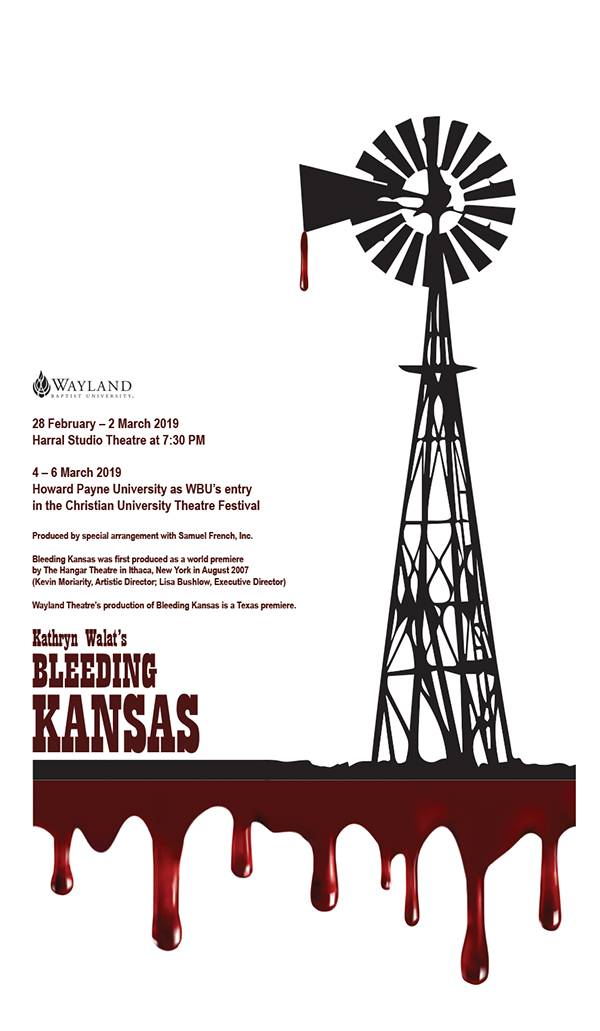 PLAINVIEW – When Dr. Marti Runnels, Director of Theatre at Wayland Baptist University, was looking for a spring play, he wasn’t looking for one that touched on a subject he has been passionate about during his 30-year tenure. But that is what happened when he picked up Bleeding Kansas by Kathryn Walat.

Wayland Baptist University Theatre will present the Texas premiere of Bleeding Kansas on Feb. 28, March 1-2 at 7:30 p.m. in the Black Box Theatre. The cost is $8 and tickets can be purchased at wbu.edu/theater. Click the “Buy Tickets Now” link.

The show will also be taken to Howard Payne University on March 4-6 for the Christian University Theatre Festival. It will be the final show directed by Dr. Runnels who is retiring at the end of the semester.

Set in the stark plains of Kansas in 1855, prior to the Civil War, Bleeding Kansas looks at the human condition as people try to reconcile differences that are dictating politics. The title of the piece, which was published in 2011, refers to the conflict around the decision of whether or not the Kansas Territory would allow slavery, thus entering the union as a slave state or a free state. The story focuses on the conflict among families.

Runnels said he chose the play due to how it speaks to today’s social climate and much of the divisiveness that is seen in society.

“Some people say there has never been a time in our country when we have been more divided than we were then,” Runnels said. “That may be true, that may not be true. What I know is that perhaps we have been divided for a long time, but certainly now, the divisiveness or the divisions are perhaps more apparent than they have ever been.

Runnels said the drama apparent in Bleeding Kansas is in direct correlation to what we see today. And while the conflict between sides is a major point in the play, Runnels is hoping the audience will receive a message of a different sort.

“It’s not really about who’s right and who’s wrong,” he said. “At the end of the day, who really cares about that if in the process we can’t be civil to one another.”

Bleeding Kansas was first produced as a world premiere by The Hangar Theatre in Ithaca, N.Y. in August 2007, prior to publication by Samuel French, Inc.