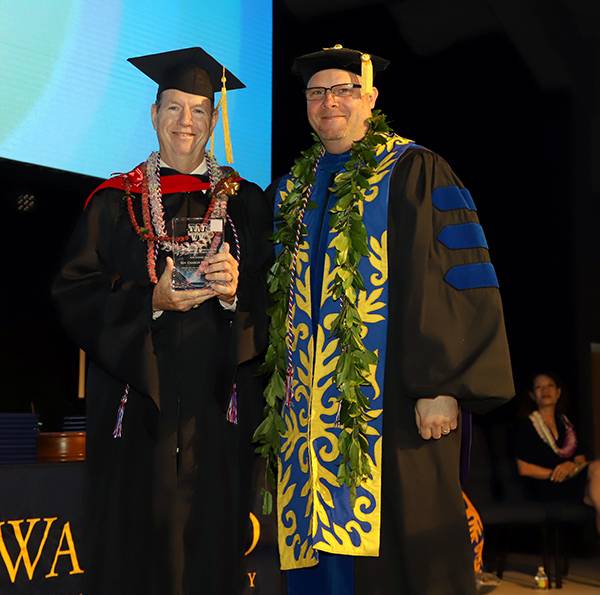 HAWAII – Wayland Baptist University honored one of its alumni at the recent graduation ceremony in Hawaii. Amid a backdrop of degrees and commencement addresses, Rev. Charles Beaucond was named the Distinguished Alumni Award winner for the campus for 2019.

Beaucond is pastor of the First Southern Baptist Church in Pearl Harbor. He is a veteran of the U.S. Army, having retired in 1997 with 20 years of service. He is a native of Colorado, but has lived in Honolulu for 18 years.

While serving in the Army, Beaucond said he came to faith in Jesus Christ, but did not pursue ministry for several years. After retirement, he worked for a while on Wall Street for Morgan Stanley, then went to Hawaii to work for the Department of Army Civilians from 2001-05.

At that time, he felt the call to ministry and has been in full-time service since 2006. His current pastorate began in 2011. He earned a Master of Christian Ministry degree from Wayland in 2009.

Charles has been married to wife Suk for 40 years, and the two have two adult sons and two grandchildren, all of whom live in Oahu. He volunteers in the community through his church, regularly at a local mission.

“We are proud of alumni who serve the Kingdom through church work, and we have had many like Charles Beaucond who come to ministry as a second career,” said Teresa Young, director of alumni relations at Wayland. “Our distinguished alumni are making a difference in their communities and beyond, and Charles is no exception.”

The Wayland Alumni Association recognizes an alumnus from each of its 13 campuses throughout the calendar year, culminating in the homecoming awards banquet and the presentation of the Alumnus of the Year chosen from the 13 honorees. As 2019 closes, a total of 16 individuals have been honored by the university for their accomplishments, representing a wide breadth of professions, locations and military backgrounds.