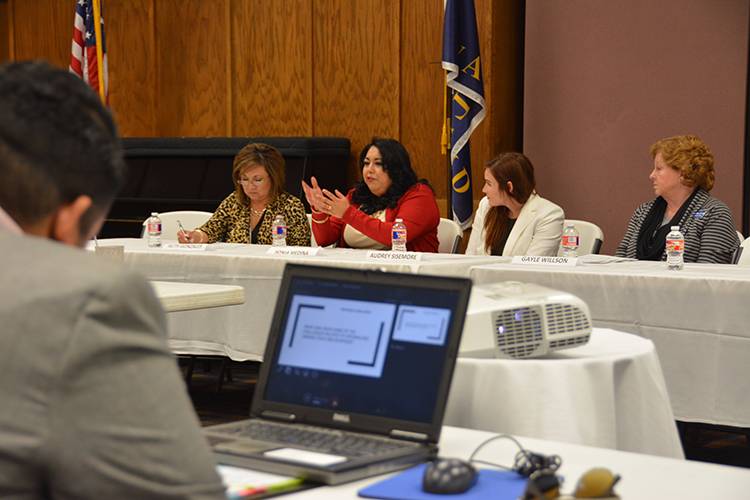 Medina opened her business in 2005, originally selling goods from her vehicle. She now owns three buildings on Joliet St. where she sells fashion accessories, goods, and crafts, and rents equipment such as tables and chairs for special events. Gonzales is in her fifth year of operating her retail consignment shop. Willson opened her business in 2010 and now has a second store in Lubbock. Good Hearing Center sells devices to aid the hearing impaired. Sisemore, who is a senior at Wayland, graduating in May, officially started her photography business in January, born from her hobby.

Moderated by Assistant Professor of History Dr. Rebekah Crowe, the group responded to questions addressing the challenges and hardships they have faced as business owners. Medina said starting a business was especially difficult for her as a Mexican immigrant who came to the United States years ago. She is now an American citizen, but said it is still difficult dealing with the language barriers she faces with English as her second language.

“You have to be brave,” Medina said. “It is a risk and you have to take the risk.”

Medina said her biggest hardship came when the building where her store was located sold. She thought about just closing her shop, but then decided to step out in faith and purchase her current location. Using the additional properties for income, she was able to pay back her loan in five years.

Sisemore said her biggest challenge so far has been in finding the courage to start her business and having the confidence to know that she is qualified and that people will want what she has to offer. Willson agreed, saying she had difficulty believing that she was a professional and knew her business. She said, however, that through her business journey she has determined that having the knowledge isn’t enough. You have to show that you are willing to do what is best for the customers.

“My dad used to tell me that people don’t care how much you know until they know how much you care,” Willson said.

Gonzales encouraged potential business owners to get a degree in business in order to better understand what all it takes to operate a successful endeavor. She said she did not have a business background, but her husband does and she relied heavily on him.

When asked how they would define success, the group agreed that focusing on the customers and their needs is the key to running a business.

“It’s not about the money,” Willson said, “but knowing where your ministry is.”