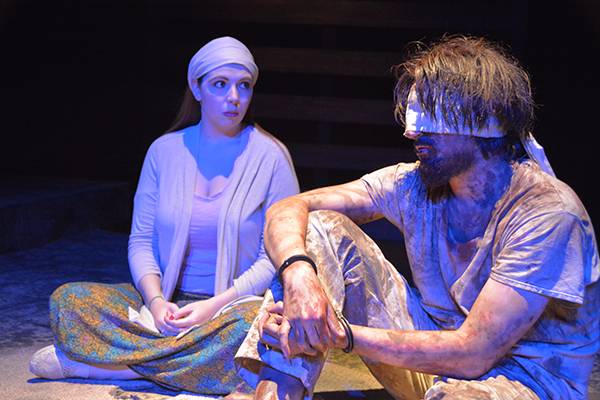 Jordan Sisson (left) and Josh Walters portray Lainie and Michael Wells in Two Rooms, a play by Lee Blessing about a couple split apart when he is taken hostage in a foreign country.

PLAINVIEW – The School of Fine Arts at Wayland Baptist University will present Two Rooms by Lee Blessing Thursday, Friday and Saturday nights in the Black Box theatre in the Harral Fine Arts Center.

The show will start at 8 p.m. on Thursday and 7:30 p.m. on Friday and Saturday. There will also be a 1:30 p.m. performance on Monday afternoon as Wayland’s entry in the Christian University Theatre Festival. Admission cost $8 and tickets may be purchased online at the School of Fine Arts website. Click here to buy tickets. Seating will be extremely limited for the Monday afternoon performance.

Directed by Dr. Marti Runnels, Dean of the School of Fine Arts, Two Rooms is a story based on real hostage events in the 1980s. The plot surrounds a man and his wife who are separated when he is taken hostage. She returns to the United States where she tries to get the government to help get her husband released.

“It’s about the Lebanon situation in the 1980s,” Runnels said. “It’s set during that time period when things were exploding over there between what was going on in that county and the surrounding middle east and what was going on over here.”

Runnels said the major conflict is between the media and the government, both of which want to wife to react in certain ways. A very private person, she is caught in the middle, trying to decide what is best for her husband and the other hostages who are in similar situations.

As a coping mechanism, the wife clears a room in her house to simulate what she feels her husband is going through. In this room is where she connects with him.

Runnels said he knew this would be a tough play to perform, but it has been even more difficult than he originally imagined.

“I told the students form the beginning that it would be tough,” Runnels said. “But it’s tougher than I thought it would be just trying to get college students to understand what it would be like just to have your husband or wife separated from you for years at a time, knowing any day they could be killed. How do you function in that world?”

Josh Walters plays the role of Michael Wells, the hostage, and Jordan Sisson plays his wife, Lainie Wells. Ryan Hernandez and Tammy Brooks are the other cast members who portray the media and government official.

The performance is a multi-media production that includes images and recording of real people and real quotes from that time period.