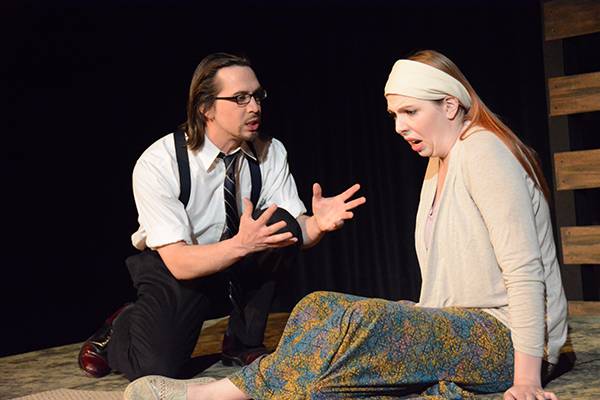 PLAINVIEW – Wayland Baptist University is hosting the 2017 Christian University Theatre Festival (CUTF) beginning Monday and concluding on Wednesday. The festival is a showcase of theatrical performances by Christian universities and includes a master class, led by the festival’s respondent.

The public is invited to attend the presentations with the understanding that seating is extremely limited due to the number of participants.

Wayland will present its show, Two Rooms by Lee Blessing, at 1:30 p.m. on Monday. Hardin Simmons will perform Sylvia by A.R. Gurney at 8 p.m. on Monday. The Tuesday afternoon show will take place in Lubbock as LCU performs three one-act plays, The Drowning Girls by Beth Graham, The Yellow Boat by David Saar and Where Have All the Lightening Bugs Gone by Louis E. Catron. The Tuesday evening show, Salted with Fire by Matt Rutkowski, will be performed back in the Black Box by Howard Payne. McMurry will perform the final play at 1:30 on Wednesday, A Park from Noon to Night by Charles Hughes. All performances except for Lubbock Christian’s will be held in Wayland’s Black Box theatre.

Wells, who has also taught theatre at Oklahoma Baptist University, and Olivet Nazarene University, is a National Michael Chekhov Certified Teaching Candidate. He teaches and presents workshops throughout the west and southeast. He has a Ph.D. from Texas Tech, and has directed numerous productions. Wells’ master class will take place at 10 a.m. on Tuesday.

The CUTF was born from a need for smaller, Christian universities to participate in a theatre festival without the extravagant costs and competitive environment associated with the larger American College Theatre Festival.

Dr. Marti Runnels, Dean of the School of Fine Arts and Director of Theatre at Wayland, was in on the ground floor of the CUTF and said his desire was to develop a festival at which schools can present works and be critiqued in an open environment where all participants can learn from each other and not feel the need to compete.

“Here, what happens is the respondent who is sympathetic with and understands and is a part of the Christian community, responds to the shows, and also recognizes maybe a cast or a real outstanding actor or design. But there is no first, second or third places. You don’t advance here to go somewhere else,” Runnels said. “What happens, students come together and it’s relaxed and everybody meets each other and they make friends.”